With CloudJiffy you are able to scale both SQL and NoSQL databases: 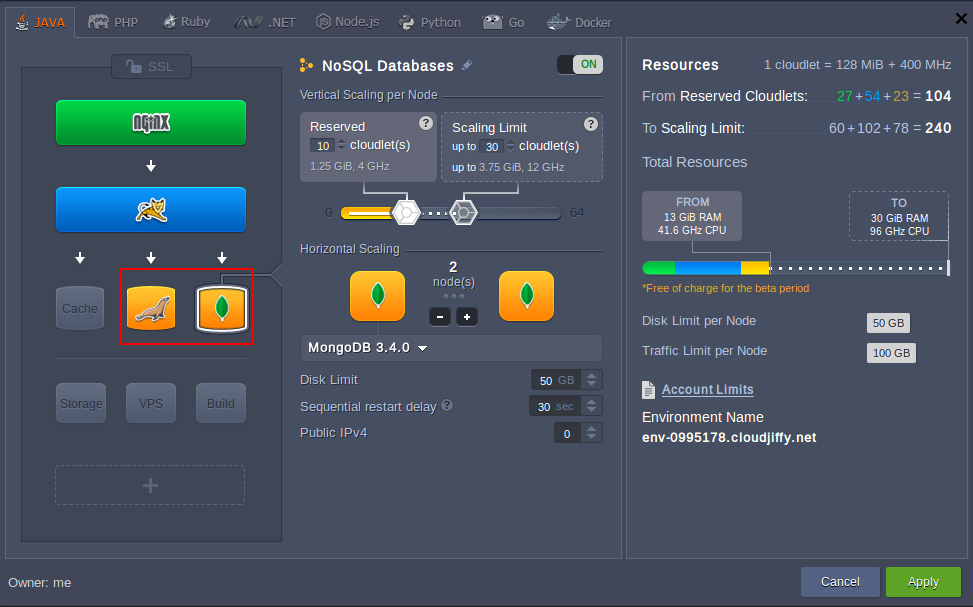 Each newly added database server has its own host name (which consists of DB name, node ID and environment’s host) and credentials for administrator access, that you’ll receive in separate email notifications after addition.

The scaling out approach for database servers implies a completely new node addition, i.e. created servers will have the default content (the existing databases and records of the initial DB server won’t be copied to the new instances). In such a way, after increasing the number of database nodes, you’ll receive a set of independent servers.

Tip: You are also able to automate database horizontal scaling based on incoming load with the help of tunable triggers.

You can also reset the password not just for a separate DB server, but for the whole set of databases in case it’s necessary to regain administrator access for all of them:

For ensuring your data security and gaining the increased performance, it makes sense to configure the replication between the servers of your DB cluster. CloudJiffyprovides you with two flows to setup a DB cluster:

Sometimes, it may be preferable for your DB cluster to include more than just two servers or you may want to set up replication for the already existing environment with your application deployed. In such a case, please, follow one of the instructions below (depending on the chosen database system):

We are also going to automate these operations in the nearest future in order to make our platform even more easy-to-use and to save your time for coding.

Application Server Horizontal Scaling The first thing you can notice while increasing the...

Triggers for Automatic Horizontal ScalingCloudJiffy allows you to automatically scale your...

CloudJiffy is the  Cloud PaaS which can automatically scale any application, both...