The majority of modern web-services should be accessible for users at all times. A common but often overlooked problem here is the process of project re-deployment (i.e. update), causing your application to go down or return errors until the operation is finished. This can be solved with a variety of tools like Capistrano, Fabric and others. However, these supplements often require additional time, expense, and specialist knowledge for being successfully integrated and configured properly (e.g. this may be performed through setting up multiple servers with a load-balancer in front of them; while the deployment is running on one server - it is excluded from the route list, after that other servers could be updated). Obviously, such an implementation is rather complicated and requires a lot of extra resources, thus a better method is needed.

Such a new solution was proposed for PHP applications, running on top of Apache, by founder of this programming language and, simultaneously, CloudJiffy technical advisor - Rasmus Lerdorf. As an actively used at Etsy, and, therefore, being a battle-tested approach, it was subsequently taken as the basis for Zero Downtime & Atomic Deployment feature in CloudJiffy. The main idea of this method rests on the following two points:

In such a way, the updated project files can be seamlessly deployed, while the initial code version continues working and handling users’ sessions. And when the deployment is fully completed, the symlink instantly switches to the most recent version of the successfully deployed app, starting to redirect all the incoming requests to it. All of these together makes the deployment process fully atomic and implicit for your customers, simultaneously relieving you from performing plenty of envisioned manual operations.
Note that the availability of this functionality requires CloudJiffy platform version 3.3 or higher and depends on your hosting provider’s settings.

Below, we’ll explore this mechanism in more detail by describing:

First of all, we’ll consider more specifically how the above described PHP zero-downtime deployment mechanism actually works onCloudJiffy - let’s examine all of these processes step-by-step with a real example.

1. To start with, you’ll need a PHP environment (either a new or the already existing one) - we’ll use Apache for this example: 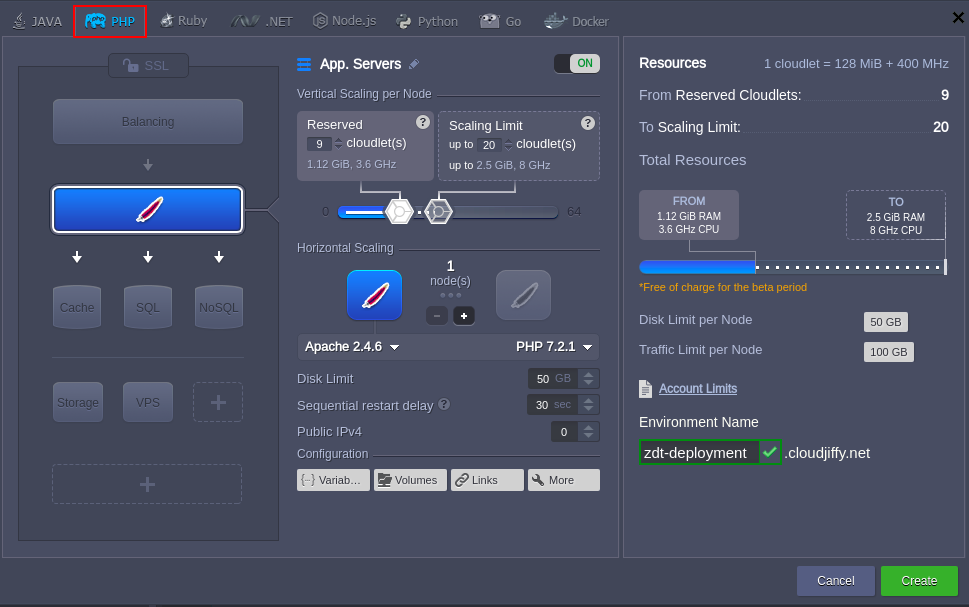 2. Next, proceed to the deployment of the required application. During this procedure, you need to tick the corresponding checkbox at the appropriate confirmation frame (depending on the project source type used) in order to enable the ZDT deployment option:

3. During the initial deployment, a ROOT_timestamp (i.e. ROOT_year.mm.dd-hh.mm.ss) folder and a special ROOT file as asymlink to this folder are created inside the webroot directory of your application server.

As normal, the application is ready to handle requests just after the deployment process is finished.

4. During the second deployment (i.e. when deploying an update), a new ROOT_timestamp folder is created - in such a way, the actual application version and customers, that are currently working with it, are not influenced.

Just after the new files are unpacked, symlink switches to this new folder, redirecting all the newly received requests to it. Herewith, the first folder is kept for processing the “old” users’ sessions (i.e. where handling started before the symlink switching).

Note that while updating an app version using archive/URL, all the comprised user-generated content (if there is any) should be manually moved to the newly created app directory from the older one, stored alongside (herewith, previously such an operation implies the full overriding of all the context data).

If using VCS, the app’s directory content is entirely copied (both tracked and untracked files), so no manual operations are required. However, we recommend to adopt the practice of the .gitignore list usage for the unnecessary files of your project, as this would save you some amount of resources and time during repetitive re-deploys.

Delving into the details of technical implementation, the atomic deployment option support at CloudJiffy is ensured by the following adjustments, applied to the corresponding PHP instances:

To prove the benefits of the ZDT update approach, a simple load test was run, with the following parameters as a basis:

So, let’s evaluate the results for both deployment methods with the simple statistics we’ve received.

Let’s start with the most commonly used variant of the project deployment, namely - classic, i.e. installation from a single archived package with no extra options like ZDT enabled:

As you can see, we actually get pretty good results:

Now, let’s perform the same test with the second competitor - ZDT. For a better comparison perception, we’ll keep the same color legend as before:

Response time remains stable and almost unchanged, but you can notice its slight enlargement during the update procedure, which is caused by the additional deployment process running alongside the serving of requests. Herewith, there isn’t even a single errorduring the whole test.

So, in such a way, we can assume that zero downtime deployment overcomes the problem of failed requests during application redeployment, simultaneously keeping the average response time on the same level. In addition, the atomic option leaves you a possibility to save all of the user-generated content, located inside the application directory, and easily move it to the new app’s version if necessary (while the classic method normally implies just the entirely new app version deployment)

You may also notice, that the minimum requests’ handling time for the classic method is significantly lower than for the atomic one and, therefore, seems to bring better performance. But don’t be mislead, as it’s just a side effect of the failed requests presence (where serving time is also counted, despite it being not processed), while the average response time is almost the same for both methods.

Next, let’s repeat our test for the second CloudJiffy deployment type (i.e. if using Git/SVN repos) in order to find out whether ZDT retains its advantages in this case. And again we’ll start with the classic method:

As the deployment sources are placed at the remote resource, this will require a little more time compared to the installation from the already uploaded archive, which, actually, helps us to clearly see the difference. The response time now has a pretty long drop down (for nearly 4 seconds in our case), caused by the unavailability of the application (you can see that incoming requests start to fail at the same time - this is shown with a spike at the errors graph). Everything else remains similar to the previous deployment type.

Note that unlike the archive deploy (where the old project is entirely removed before redeployment, which will always cause downtime), here the update procedure assumes changing of the differing files only. Therefore, you may not face any interruption in the service work if the files that are required to be changed, are currently unused.

Finally, the last test for the ZDT deployment approach via VCS also goes in line with our expectations by bringing a stable response time with its small incrementation during the simultaneous running of such operations as users’ sessions handling and project copying/updating.

At the same time, you can see that no errors appeared and all of the incoming requests are successfully processed.

Now, when you have all the information (both raw technical and visualized in graphs practical one) on the investigation and have seen how it’s easy to use the ZDT option within CloudJiffy Cloud, it’s time to summarize and make a conclusion on the key benefits it brings for your PHP app’s hosting:

In such a way, ZDT deployment usage makes updating of your projects completely painless and invisible to customers, helping you to get the most from your application!

PHP Connection to MongoDB MongoDB is a widely used NoSQL database, implemented based on the...

Connection to PostgreSQL for PHP Applications Follow the instruction below to learn how to...

Connection to MySQL/MariaDB for PHP MySQL and MariaDB are highly popular open source...

The high availability of your PHP application can be achieved by implementing PHP sessions...